As the holiday season approached, SEO continued at its normal pace. A couple of updates were finalised in December; where felt their impact was quite extensive.  If you would like regular updates from Uprise Up on the world of digital marketing, follow us on Twitter.

Google took to Twitter on 8th December to confirm their update to the local search algorithm had finished rolling out. An update they omitted to tell us about in November (a mistake said Danny Sullivan). 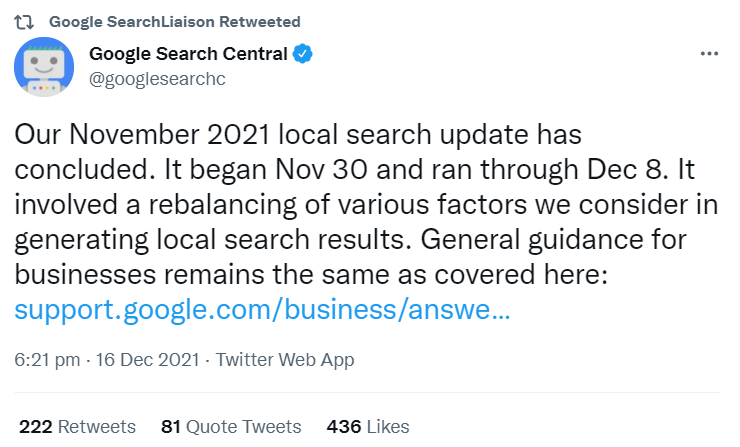 First rolling out in November, the update sought to tighten up its algorithm by re-distributing the weighting placed on different factors Google considers when creating search results pages. The impact has been widespread. The user’s proximity to a business is a factor that has become more important, with businesses dropping down in rankings the further they are from their address.

Overall, a shake up to the rankings for businesses, but one that could prove beneficial to new businesses starting out.

Following a major update in April, Google have released another product reviews update. The April update was designed to promote high quality reviews; that is, reviews that are deemed useful by search users. The December update was considered by Google likely to have an impact on organic rankings – especially where sites have made changes in response to the April update. Google does note however, that their assessment of review content is just one factor taken into consideration when ranking a site’s content.

The impact of this update was pretty big and volatile; it affected rankings much more than the April 2021 update did. For advice on publishing high quality reviews, check out Google’s Guidelines.

As a result of user feedback Google revealed they will be introducing two new features in a future update as well. These features are:

So, the next step to improving reviews is to provide different types of content within the review, not just text. This helps prove the authenticity of the review, as well as improving its usefulness. The latter, however may not be the most helpful to merchants, with links to competitor sites being offered to users alongside their own.

Did we miss anything?

If there was anything else that happened in December that caught your eye, feel free to tweet us at upriseUPSEM, email us at [email protected], or simply send us a message through our contact page. We’d love to hear from you.

SEO Highlights for September and October

Autumn is here, bringing with it thick jumpers, PSLs and SEO highlights galore.